Puppet Rebellion are all that you want and need!

On the road again, armed with anthems, GTS catches up with the band and finds them sounding better than ever.

PUPPET REBELLION begin a UK tour this month. The Manchester band have not featured on Given to Sound since their 2013 debut Chemical Friends and in the time we have been looking the other way one truth has become very evident – they are producing the best music of their career so far. That’s not NME hyperbole, Chemical Friends was a solid start and No Means Yes (February 2014) had bigger better moments than its predecessor but Life Is In Your Hands, released last August is the best yet.
Since their debut, Puppet Rebellion has had some personnel changes – Danny Moss replaced Chris Carcamo on drums and Oliver Davies replaced Simon Monaghan on vocals. They don’t seem to have missed a step, each offering finds them getting stronger.
They are showing the kind of progress you hope for as a fan, listening to all three EP’s you can literally hear them growing and changing and trying new things. Don’t get me wrong blowing people’s minds with a debut is great but it leads to inevitable second album issues because you face pressure that it won’t ever be as good, subsequent albums can end up being watered down versions of that one great sound you heard on the debut. Puppet Rebellion are doing things the right way.
On Sunday, as Manchester United put Arsenal to the sword, lead singer Oliver Davies was singing the praises of Marcus Rashford (four goals in two games and an exam the next day, dream stuff). As the band prepared to hit the road for the tour he caught GTS up on where they found themselves musically;

“People have certain styles of writing and patterns in terms of melodies and hooks. I’m a big fan of catchy melodies and that’s what i try to do, as a result we’re sounding slightly more mainstream.”

There aren’t enough nice words to say about the entire Life is in Your Hands EP and straight away you can hear the sonic improvement. It’s fuller and more melodic. The opener is the title track, Davies’ vocal style are made for this band and the sound is now basking in wider open spaces, if anything it’s less raw and abrasive and garagy – the song is a live favourite and it doesn’t take long to figure out why. They are painting with more musical colours these days. Life is in your Hands is an absolute tune.

On Claim to Fame the band are downright obnoxious, musically and lyrically they take no prisoners; “We don’t need your words for inspiration, no we don’t need your pedastool” they’ve come a million miles from Chemical Friends in truth. You know it’s a good song when you go back and listen to it straight away just for the sound of the singers phrasing or that moment an instrument makes that note you love. That may sound stalkerish but if you haven’t connected with music on that level then I feel sorry for you.
When the band does go into more of a stompy direction, as they start to on Test Pilot they pull it back from being that one dimensional, there is a spoken bit here which reminds me a little bit of Doves’ song Black and White Town; “this is a dangerous place, man…there’s nothing here”. the singer here sings about making a difference, “start now, you wanna change? start now! No one told you it was hard, you ignored everyone that did” and “I have a dream? What does that mean!” – as a call to arms it’s pretty damn cool. Motivation should always sound this funky. I’m not doing justice to the full lyrical epicness of this tune. I find out that part is not Oliver at all, it’s actually the voice and the idea of guitarist Craig, and it works.
“Where is your will? where is your goal? Find your redemption!”

If you want to look back before going forward, the other two EP’s are there for you to listen to; GTS recommends The New Twenty from Chemical Friends, Green Eyed Monster and Cupboards Painted Red from No Means Yes, which points to the more melodic direction they would explore on Life is in Your Hands.
Some bands find a comfort zone and stay in it, that hasn’t been the way so far for Puppet Rebellion, that much alone is evident from their output. They are a forward thinking band. Bands shouldn’t be thinking that they can’t top their recent album, they should always believe they can and they should always try to do it, nothing should frighten and delight you more than Oliver’s closing words;

“We’re currently writing a lot of material and we firmly believe the best is yet to come!”

One listen to their latest single, Fragments, released in February, shows he’s not wrong. The band are writing anthems near as damn it, they were always trying to get somewhere and there seems to be a firm belief that it is happening. This year will be very interesting. All hail the rebellion.

Puppet Rebellion music can be bought from their official website, iTunes, Amazon or Google Play. 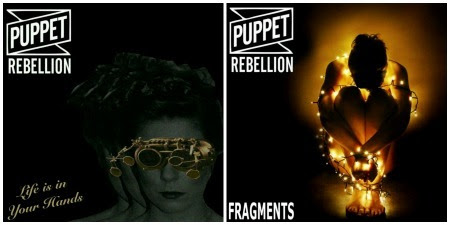 I write words about things I care about and hopefully you'll care about them too when I'm done. END_OF_DOCUMENT_TOKEN_TO_BE_REPLACED
This entry was posted on Friday, March 4th, 2016 at 2:06 am and tagged with Puppet Rebellion and posted in Manchester Music, The Hungry And The Hunted. You can follow any responses to this entry through the RSS 2.0 feed.
« Is There Life In Marr?
Wheelchairs In Mosh Pits and Hands Like Houses »